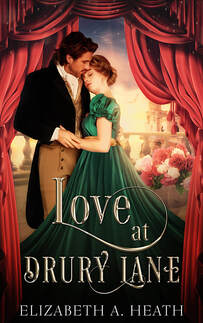 Available Now!
Get my free book!

Isabella was born for the stage but London society has yet to acknowledge her talent. With her father’s declining sobriety and their landlady demanding rent they don’t have, it is more important than ever for her to rise in society’s esteem by acting in a lead role.

When Jonathan first sees Isabella perform, he finds himself drawn to her. But as a duke, she isn’t a suitable match for him. Still, wanting to be near her, he offers to become her patron, with the caveat that he approves her roles.
​
But when Isabella is cast in a part that Jonathan thinks is undesirable, they will be forced to decide what matters, society’s approval or their happiness?

Join the Ton for news, freebies, and all the latest on-dit.

Elizabeth on the Web